This post is Part Two of a three-part series. View Part One | View Part Three.

In the previous installment of this three-part article series, we examined the different types of payers and how the billing rules are significantly different if the patient is covered by Medicare, Medicaid, a commercial insurer, or is a self-pay. Now let’s turn our attention to the sometimes-complicated Medicare bundling rules that apply to hospital inpatients.

In the previous installment of this three-part article series, we examined the different types of payers and how the billing rules are significantly different if the patient is covered by Medicare, Medicaid, a commercial insurer, or is a self-pay. Now let’s turn our attention to the sometimes-complicated Medicare bundling rules that apply to hospital inpatients.

If you transport a hospital inpatient who is covered by Medicare, there are several questions you’ll have to answer to determine who to bill.

Before we delve into the specific rules, let’s take a quick look at the basic Medicare bundling concept. Medicare shifted much of its payment strategy over the years to put more financial responsibility on hospitals and other facilities. Part of that strategy was to “bundle” the billing for Medicare patients who are admitted to a hospital. This means that Medicare pays the hospital a set amount of reimbursement, under Part A, that is determined prospectively by the patient’s admitting diagnosis. With some exceptions, any outside healthcare service providers must generally bill the facility for their services instead of separately submitting a bill to the Medicare program for payment under Part B. In hospitals, this prospective, bundled reimbursement amount paid to hospitals is based on Diagnosis Related Groups (DRG), a system which was implemented in the 1980s. Remember that DRG-based inpatient bundling applies to Medicare, because the law says so. It does not automatically apply to non-Medicare payers, and it is imperative to identify the proper primary payer first.

Now, let’s get into some of the specifics.

First, let’s dispense with an easy one: a patient being transported to a hospital emergency department from a scene of an emergency (e.g., home or an accident scene) is not subject to the Medicare inpatient bundling rules, even if the patient is subsequently admitted as an inpatient. This transport is covered by Medicare provided that the normal coverage rules, such as medical necessity and nearest appropriate facility, are met. By the way, if those coverage criteria are not met, then the transport is billable to the patient as a non-covered service, and your agency may charge its full retail rate and apply any hardship criteria it may have in place.

Now, let’s look at Medicare hospital inpatients who are transported from a hospital to another facility and not returning to the hospital of origin. There is a specific set of rules, which we call the Medicare “three-part test,” for determining who to bill for this interfacility transport.2 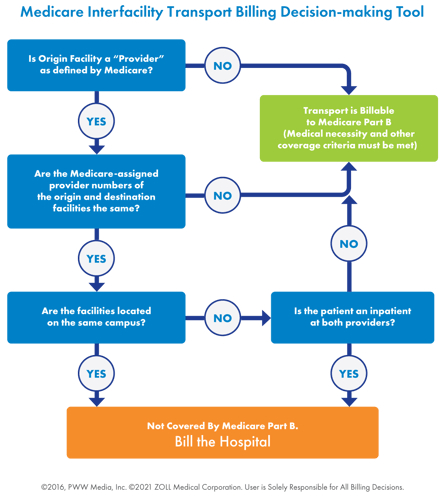 If the Medicare provider numbers of the two facilities are different, the transport is billable to Medicare Part B, provided that all applicable coverage criteria (e.g., medical necessity, nearest appropriate facility, etc.) are satisfied.

If the Medicare provider numbers of the two facilities are the same, it is necessary to go to Part 2 of the three-part test.

Part Three. If the Medicare provider numbers of the two facilities are different, and the interfacility transport is between facilities on different campuses, you must determine whether the patient was an inpatient at both the facility of origin and the destination. If you pick up a Medicare hospital inpatient and transport them to a facility with the same Medicare provider number on a different campus, and the patient is directly admitted as an inpatient at the second facility, the transport is properly billed to the hospital.

If the patient is not an inpatient at both the origin and destination facilities, the transport is billable to Medicare Part B, provided that all coverage criteria are met.

Some Notes on the Three-part Test

There are a few quirks to look out for when it comes to properly applying the three-part test for Medicare hospital inpatients transported to another facility. First, when determining whether the patient is an inpatient at both facilities, be aware that inpatient status is defined by Medicare rules. It is not necessarily the same thing as being in an inpatient bed. For Medicare purposes, an admission occurs when an admitting physician writes an order for admission. In that case, admission may begin even before a patient lands in an inpatient bed.

Next time, in Part Three of this article series, we’ll answer the question, “How much of the bill must the hospital pay?” Stay tuned.

Demystifying Proper EMS Billing for Hosital Inpatient Transports Part 3: How Much Must the Hospital Pay?

Along with a new year, January 1 will usher in watershed changes to the American Medical Association’s (AMA) “Current Procedure Terminology...
Read More >