Advanced Cardiac Life Support was first published by the American Heart Association in 1974. Despite 45 years of this evolving medical standard and practice, survival in most communities remains the same nationally at 8-10 percent.

Yet, there are several places where survival rates are 5 or more times the national average, sometimes for decades. See the wide variable community survival below:

My passion for CPR and out of hospital cardiac arrest began when I was working at the University of Florida Health, Jacksonville. I was responsible for taking over a program that one of the senior residents had developed for post-cardiac arrest care of patients that had return of circulation (ROSC). The program was focused on the (new at the time) therapy of cooling patients post-arrest to improve neurologic outcome.

This made me look at the data, where I made a surprising discovery. Our patient’s survival rate was much lower than expected. I decided to dig in and look more closely at what was going on, as well as do some research on successful best practice. All of this led to an important realization: the lower survival was the result of poor bystander CPR and huge disparities in CPR rates.

We knew that several other communities had success by creating bystander CPR programs as well as 911 Telephone-Assisted CPR. So, we started a Hands-Only CPR program that helped provide training to more than 30,000 residents. From there, we launched an Advanced 911 Dispatcher Training Program. The program involved simulation that allowed the various dispatchers to play direct rescue roles as well as dispatch. The telecommunicators were able to learn how their algorithms compared and make improvements to shorten the times to telephone assisted CPR, a key metric to improve survival.  As the outreach took hold we looked at creative ways to reach out to groups to teach CPR.

One of the relationships that we built was with the running community.

The Gate River Run, held every March, is the National 15k championship. The race attracts more than 25,000 runners and hundreds of thousands of spectators. UF Health Jacksonville is one of the race sponsors and provides a medical support crew, which I had served on a few times. In 2010, the Emergency Medicine Residents, hospital staff and I started a Hands-Only CPR program for the Gate River Run expo. In doing so we were taking a page out of the Boston Marathon’s playbook, as they planned to do the same the following month.

The CPR training was based on a New England Journal of Medicine article on runners collapsing during long distance races and the most important factor being time to CPR.

A couple of years later, I signed up to tackle the 15k Gate River Run. On race day, I had just turned the corner onto Hendricks Boulevard when I saw a woman shooing runners away because someone had collapsed. I immediately headed over to help and found a runner on the ground, flanked by two other runners who were starting CPR. I knelt down to check for a pulse, but couldn’t find one without CPR. The runners performing CPR were doing the Hands-Only technique masterfully – I later found out they were Jacksonville Paramedics who were also running the race.

Their CPR was so good that the man would wake up, we would stop CPR, only to find out he had no pulse and then he would go out again. This happened a few times until a bicycle paramedic came by and then radioed to the fire department for help.

The firefighters ran two blocks through the crowd with a defibrillator. The victim was in coarse ventricular fibrillation, a shockable rhythm. When he was shocked he woke up pretty quickly and wanted to continue the race! I looked around and all the other good Samaritans were gone.

I confirmed that the firefighters didn’t need me anymore and then went on to finish the race. I even made my target time despite 10 minutes of CPR!

A few days later I got a call from one of the emergency department techs. He told me that the guy I helped rescue wanted to talk to me – naturally I gave him my number! The gentleman called me the next day, introduced himself and thanked me for saving his life. He invited me, alongside the other rescuers, to go out to dinner with him. The next Saturday we all got together at the Fire Union Hall for one of the most unique dinners of my life. He even gave us all a plaque to commemorate our service. I have it on my desk to this day. 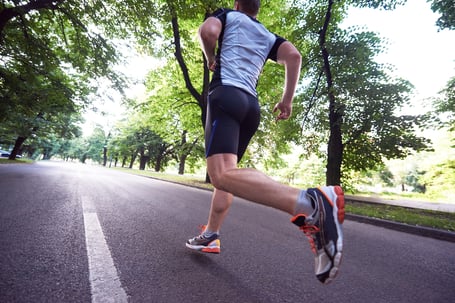 How does that story tie in with the Prescription CPR Program?

The Institute of Medicine Report on Cardiac Arrest “A Time to Act” 2015 laid the foundation for improving community survival. After reading it, I recognized that the high-risk age group are the least likely to be trained. We created a program that ties telephone assisted CPR and high-risk patients. I combined my roles as Medical Director of our Clinical Decision Unit and our Emergency Medical Dispatch with medical community outreach to help change our community survival numbers.

In my presentation at ZOLL SUMMIT 2019, I’ll discuss how to identify high-risk individuals through electronic medical records (and other avenues) and offer training in life-saving interventions to the patients, their families, and friends who are the likely bystanders at the time of the emergency.

Want to know more? Register for Joseph’s SUMMIT session: “Prescription CPR: How to identify high risk patients in your community and teach them and their families CPR and AED use in a sustainable way.”