Taking a Deeper Look at the Guidelines for CPR

Not so long ago, professional rescuers were taught the same things as civilians when it comes to CPR — push hard, push fast. That was all you needed to ensure you were doing good chest compressions. The new American Heart Association (AHA) Guidelines have raised the bar. Now, there is greater specificity on the rate and depth of compressions; and we need to meet these targets if we want more patients to survive and ultimately be discharged from the hospital.

Here's a look at the AHA's key recommendations for CPR from 2015:

Chest Compression Depth. Formerly, the AHA recommended a depth of greater than 2 inches. It now says depth should fall within the range of 2 to 2.4 inches (5 to 6 cm). 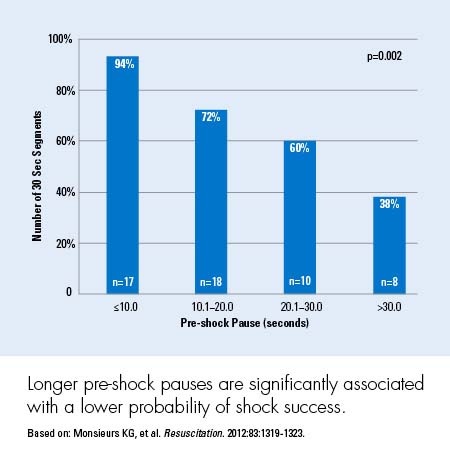 Ventilation Rate. The 2015 Guidelines recommend one breath every six seconds in intubated patients.

Chest Compression Release. The AHA now emphasizes the importance of fully releasing (allowing for full recoil) and doing so quickly.

Chest Compression Release Velocity. It's not just coming off the chest completely that is critical, but also how quickly you allow the chest to recoil. Data suggest that faster release velocity correlates with an improved survival to discharge and good neurologic status.

Debriefing. The AHA placed a major emphasis on debriefing of both mock codes and actual resuscitations.

Feedback. The AHA gave a Class IIA recommendation to the use of devices that provide feedback on the quality of chest compressions in real time during training and resuscitation events.

When you take into account all of these recommendations, it's clear that performing chest compressions is a true skill that's difficult to master. Accordingly, it's not something that should be assigned to a provider who lacks the proper training and experience.

LEARN MORE ABOUT THE CLINICAL STUDIES INFLUENCING THE SCIENCE OF CPR

Listen to Your Heart: Improving ROSC Rates in EMS

Stories of Survival, Inspiration and Innovation for Heart Month In the past year, ZOLL has hosted several “Outcomes Academy Bootcamps” to...
Read More >
Lindsay Alexander | Feb 27, 2018

Did you know that about 610,000 people die of heart disease in the United States every year? That’s one in every four deaths. Of those...
Read More >