Are You Overlooking the Human Aspects of Your Billing Office?

In EMS, we are all acutely aware of the compliance risks our industry faces. It almost goes without saying that having billing office personnel who clearly understand all the ins and outs of the many regulations is essential to remaining in compliance. But are you focusing on the technical aspects of your billing office and overlooking the human element?

You may wonder how spending time on the human side of your billing office can increase your bottom line, but in my experience, it can. If your staff is not all on the same page, it can lead to inconsistent follow-up on outstanding balances with payers and patients. The end result is that you are leaving money on the table. If this is the case, learn how you can implement solutions to this problem in your key performance indicators (KPIs) here.

When I accepted the billing manager position in December 2014, I was warned there had been a revolving door of management over the prior two years. This led to high turnover and low employee morale among the remaining staff who had toughed out this transitionary period. Employee disagreements and finger pointing had become the norm.

Step One: Identifying the Culture Problem

As I looked closer, these disagreements were usually not due to personality conflicts. Instead, they were the result of inconsistent training and accountability. The most common employee disagreement I encountered was the perception that some team members were working harder than others. When I dug deeper into this issue, I found the root cause was almost always a training issue. Typically, it was not because an employee was slacking.

For instance, if additional steps had been added to a given process, this information was not always distributed to all employees. The employee still doing the shortened process wasn’t slacking; he was just not aware of the new process and was doing the same job he had always done. Those that had been informed of the longer process felt they were being more diligent in their job than their coworkers. This bred resentment among the employees.

As a start, I changed the process for how information was distributed to my team. Going forward, this wouldn’t be a problem. But how to deal with the grudges held for past grievances?

Grabbing the Attention of Employees

I knew I had to get everyone on board moving forward and somehow convince them to stop dwelling on the past if I had any chance in changing the culture of our office. Anyone who has attempted a culture shift knows this is easier said than done. I would have to do something unexpected to get the attention of my employees.

I called a team meeting and told them I was aware of the low morale and lack of accountability in our office. Then I did the unexpected: I told them that I didn’t care. Yes, you heard that right – and you can imagine the surprise on their faces!

Setting the Expectations for the Future

Having gotten their attention, I clarified and told them what I didn’t care about was how we got into this situation; we’re already here! Since I can’t time travel, there wasn’t anything I could do about the past. What I could do was change the future, but in order to do that, I needed their help.

They were the ones who had toughed out the transition, so who better to give input into the current issues in the department and feasible solutions? I wanted to create a culture where my team members could bring me their gripes and to encourage the flow of ideas for improving the office. But just straight-up complaining wasn’t going to fly; I told them they had to bring at least one solution for each problem. 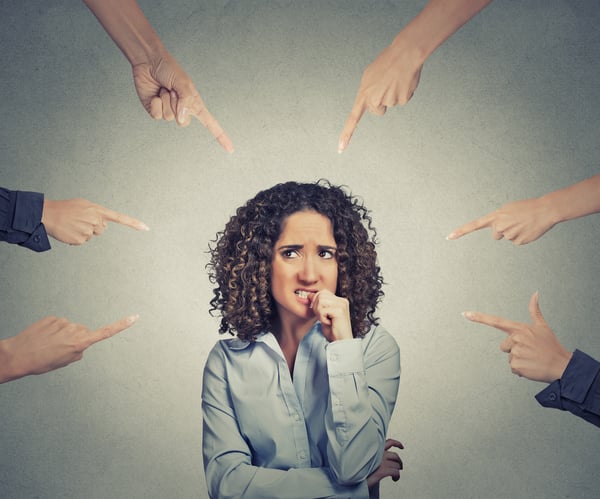 The catch? They had to do this without pointing fingers at their coworkers. Pointing fingers doesn’t solve the problem; it just delays trying to fix the problem. Finally, I told them that once we agreed upon a set of improvements, instituted them across the department, and trained the entire team on the changes, there would be no more finger pointing.

I would be the one to care about whether or not the changes we made were working, not them. I’m the manager and it’s my job to make sure the section is running smoothly and employees are being held accountable, not theirs.

As you can imagine, my approach at this meeting was a bit of a shock to them. Looking back, I believe this was an important first step in getting our billing office back on track. For several months afterwards, when an employee would come in my office and start out with, “Susie isn’t doing X this way…” I would just lean back in my chair and give them a deliberate, knowing look. The employee would stop and say, “Oh, that’s right, you don’t care!”

Then they would then launch into the real problem and offer up a possible solution without the finger pointing. Success!

When you are trying to make changes to the work culture and environment, the sooner you stop thinking “it’s always been done this way” and start charting your own course, the better off you will be.

For me, eliminating the finger-pointing was an essential part in reducing the resentment that was being held among my employees. My team became more willing to participate in the changes I was implementing because they knew I would hold everyone accountable. As an added bonus, applying consistency in our processes led to better collection from payers and patients. Learn how to see trends in your team’s data in this blog post to find out if your morale changes are effective.

Join me as I share more of the challenges I faced and the lessons I learned while trying to revamp our billing office and collection practices during my presentation at ZOLL SUMMIT 2019.

Did you find this article helpful? Browse similar blog posts on our resource page to find other ways you can boost the morale among your employees.