Driver safety is an important topic for any fleet organization, including EMS and Fire. A driver who puts safety as a top priority while operating a vehicle protects lives, saves money and in the case of EMS improves patient satisfaction. Many products claim they can help improve driver safety through various methods of coaching and/or training. ZOLL Road Safety is one product that focuses on real-time driver behavior modification, and we have seen positive results with our customers. That said, many organizations aren’t doing enough to ensure their drivers are operating vehicles as safely as possible.

As a product leader, I wanted to know more about the various methods of driver education, training and behavior modification being used in EMS and how well each are working. To gather some data and build some metrics, we conducted a survey of the EMS market to understand what driver behavior methods were currently being used, and are working well, and which methods are NOT working well.

How Effective is Driver Training on Safety?

We had a great response with more than 1,000 EMS and fire market participants responded. We asked which current methods are being used to ensure safe driving and also asked respondents to rate the effectiveness of each method on a five-point scale. The primary goal was to learn the methods in use and which ones are perceived as effective. We found that the three most widely used methods of training drivers on safety were mediocre in effectiveness, at best. (Table sorted on frequency of use.)

85 percent of survey respondents train new drivers at hire, but ranked the effectiveness of that training low.

The table above shows 85 percent of the survey respondents train new drivers at hire, but ranked the effectiveness of that training in making safer drivers to be quite low – ranking 9th out of 12 for effectiveness. The lowest scoring method used – managerial oversight of driving data – is used by more than 50 percent of respondents. There are many smart reasons to train new drivers, and equally as many reasons to review data after the fact, but for changing driver behavior (to make them safer), the most popular methods aren’t seen as effective today. Change is necessary. Without it, results won’t improve.

What about Video as a Training Tool?

The data also showed that inward, rear and forward video were perceived as being effective tools, though video doesn’t address driver behavior in real time. Here is a before and after from a Road Safety customer, showing measurable improvements one year after installing Road Safety. 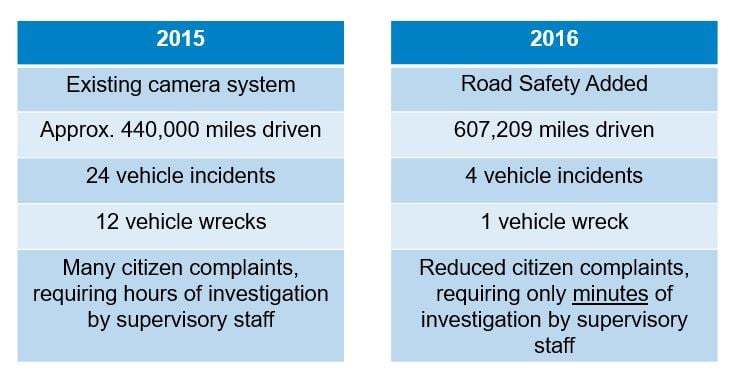 Video captures what is going on at any and all times and, unless it is streaming video, is used as an after the fact review tool. ZOLL Road Safety customers that also use video understand the value in capturing video for review, but indicate it isn’t a tool for changing a driver’s behavior in real time.

Only about 25 percent of the respondents are using one or more of the newer technologies.

Finally, the newer technologies – such as video, heads-up displays, in-vehicle audible systems and streaming – aren’t yet widely adopted. Only about 25 percent of the respondents are using one or more of the newer technologies. Is this because the products are new? Is it because they aren’t perceived as useful? Is the market even aware of the breadth of offerings that can help improve safety? Is the market looking for new tools? We didn’t ask those specific questions via the survey, but we are always working to find those answers. Email me your feedback at MMcKevitt@zoll.com.