What do Disney & EMS Software Have in Common? User Experience

Walt Disney was an early pioneer of what we now call user experience (UX). In 1966, he described his vision for what would be Walt Disney World as “an experimental prototype that is always in the state of becoming, a place where the latest technology can be used to improve the lives of people.” Disney sought to understand how people experienced the park: how they navigated through it, what they avoided, and what experiences were unpleasant and frustrating. He then set out to address those needs and continually improve the entire experience – from the moment a visitor arrives at the park to the moment they exit.

While EMS software may not be a trip to Disney World, ZOLL has made a commitment to expand the reach of UX design in our products. We are actively researching, learning and seeking to understand new ways to solve problems so “the latest technology can improve the lives of our users.” The following details why good UX matters and how we are striving to apply that to the software you use every day.

The User Experience at Disney

When I was 19 years old I visited Walt Disney World for the first time with my mom and brothers. Although I had only recently emerged from the peak of my sulky teen years, I had a wonderful time (with my family!), and I returned to the park two other times at different stages in my life. I’ve endured extreme heat, torrential downpours, hordes of people and even my own dear children in cataclysmic meltdown. Still, the park was always magical in its detail, its ability to delight and the sheer expanse of customizable attractions. Despite the small travails, my overall experience with Disney World has been special and memorable.

I recall being particularly in awe of the honed art of people-moving. Visitors are whisked away in continuous waves of trams and monorails. Long lines are broken up into short segments, each tucked out of view from the next. There are cooling misters, character actors and entertainment along the way to the attraction. Those wishing to skip the line can pay a premium and avoid the line altogether. Parents of young children can take turns riding roller coasters without having to wait in line twice. Despite the masses, things kept moving and the people being moved appeared relatively content. Disney set out to solve the problem born out of long wait times and too many people.

Disney’s philosophy, along with other early influencers, formed the basic foundation of modern UX design. In the 50s, IBM introduced usability and ‘human factors’ in engineering. In the 70s, computer-human interaction entered the arena, this time with an emphasis on psychology. It wasn’t until the mid 90s that UX design was introduced as a dedicated discipline. Coined by an Apple engineer and vice president by the name of Don Norman, Norman described UX as “encompass[ing] all aspects of the end-user’s interaction with the company, its services and its products.”

The Role of UX in Software Development

It’s with this mindset that we address problem solving in software development: we seek to gain a thorough understanding of a person’s needs, behaviors and frustrations. Then we design to meet those needs and behaviors, and to minimize the frustrations.

Still, throughout the 90s and early 00s it was uncommon to have a UX professional in a tech organization. Over the last decade, we’ve seen increasing adoption of UX into the fabric of forward-thinking tech companies, and with it the rise of applications that allow users to complete their tasks quickly, intuitively and from anywhere. Companies investing in UX design and a customer-first mindset, see greater returns on investment, improved retention and most importantly, happier customers.

You might not always notice ‘good UX’ as by nature it can be somewhat invisible. But, you may feel good about the Amazon purchase you made or the vacation you booked. You do typically notice ‘bad UX’ right away. Have you ever lost information you spent significant time entering and had to start over? Have you had to wait forever while a page loaded? If so, you most likely felt frustrated and annoyed.

User experience is a bridge between humans and technology; a multi-disciplinary field that weaves together those early influences in psychology, research, engineering and design. As it’s matured, UX now encompasses even more disciplines and specialties. It’s often mistaken as simply visual or interaction design – controls, buttons, images, colors, what ‘makes it pretty’. The following graphic (source: Dan Saffer) demonstrates the breadth and reach of modern UX design, with interaction design a subsection of the greater whole. 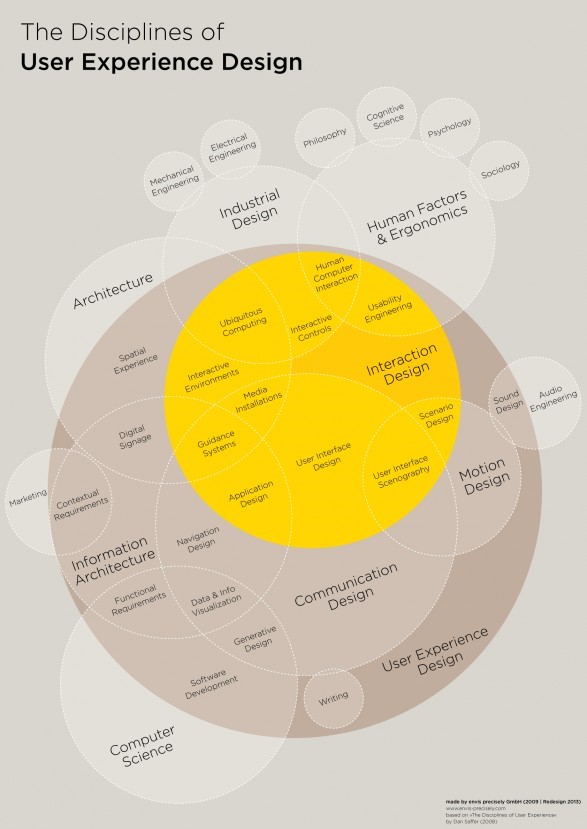 At ZOLL, UX designers work closely with product and engineering to identify problems to solve and ways to continually improve the overall experience.

It’s far more common today to have UX designers as an integral function of software development, although at varying levels depending on the company. At ZOLL, UX designers work closely with product and engineering to identify problems to solve and ways to continually improve the overall experience. Designers wear many hats and on any given week may engage in anything from in-depth research and testing to creating interactive prototypes. They want to get to know their users and will spend time visiting, interviewing and understanding their needs.

With the advent of wearable technologies, virtual reality, chat bots and artificial intelligence, a new crop of UX specialties are emerging, namely invisible interfaces. How do we design for something that doesn’t have any controls? Consider the interactions between a person and a smart speaker like Amazon Alexa or Google Home. There are no buttons to press, but yet it executes thousands of commands and can answer a question posed several different ways. The interface is invisible but a considerable amount of UX goes into making that system easy and intuitive. As technology continues to evolve, we’ll see new UX specialties emerge, along with a continual refinement of how to make product designs better for the end-user.