Like it or not, technology has made its way into the world of EMS, and it’s here to stay. Software solutions such as computer assisted dispatch (CAD) programs, billing solutions and patient documentation programs are powerful tools that can help providers and administrators enhance patient care, improve operational efficiency, maximize revenue and decrease expenses. Any one of these solutions can enhance system performance as a stand-alone program. In order to maximize the full power of these solutions, services should look at interoperability and integration capabilities with existing solutions when researching and selecting new technology. When information technology solutions are integrated, the capabilities of the programs and the benefit to the service are increased exponentially.

Challenges of a Non-Integrated System

As one of the largest hospital based ambulance services in Massachusetts, Spaulding Rehabilitation Hospital Ambulance Service provides emergent and non-emergent ALS, BLS and wheelchair van services to the Spaulding Rehabilitation Network in Boston with our fleet of 13 ambulances and 5 wheelchair vans. The department’s dispatch center receives more than 25,000 requests for service annually. Our service had been using individual solutions from ZOLL (Rescue Net Dispatch, RescueNet Billing and TabletPCR) for dispatching, billing and patient care reporting for the past few years. RescueNet Dispatch was an on-premises solution while all billing functions were outsourced to a third-party vendor who used RescueNet Billing. Several years ago, we brought a hosted TabletPCR solution from our billing vendor into the mix. The hosted Billing and TabletPCR solutions were integrated with one another, but were unable to integrate with the on-premise RescueNet Dispatch system. The inability to integrate the solutions created challenges for field providers and administrators. 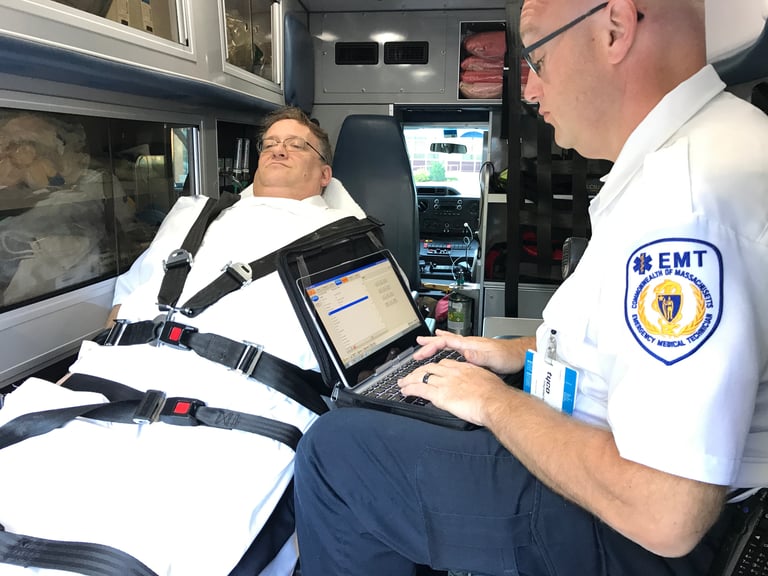 Data is an essential element in any Process Improvement plan. Any data used for improvement purposes must be high quality, consistent and reliable. Additionally, data should be easily accessible. Manually compiling and filtering data from multiple programs is both inefficient and can lead to critical errors in the analysis of the data. Integration of EMS software solutions allows for “one-stop shopping” for data needs. We found that simple integration intrinsically improved several processes such as denials and lost PCRs. Date of Service to first payment was reduced by more than 50 percent in the first three months alone. One surprising area that saw improvement was in the amount of time dispatchers spent dispatching calls over the radio. With auto population of call data on the crew’s mobile units there was a 66 percent reduction in radio time. The time saved as a result of auto population was re-tasked to alternative activities such as confirming demographics prior to claim submission.

No service wants to be on the “naughty list” of any regulatory agency. Two areas that we identified as potentially high risk for getting a service on an agency’s naughty list pretty quickly include patient and crew signatures and validity of run data submitted to state agencies. Using the data from the integrated system, the underlying issues were identified and a process improvement plan was developed. As a result, validity scores increased almost 17 percent and more than 95 percent of all transports have the necessary signatures as required by regulations.

Appropriate documentation continues to be an area that many services continually struggle with. From a regulatory standpoint or a reimbursement standpoint, appropriate documentation is essential. What used to consist of multiple complex processes, continuous quality improvement/quality assurance (CQI/QA) workflows were reduced and streamlined. The new workflow allowed for 100 percent review of all calls rather than the traditional 25-30 percent of all calls without adding any additional staff. In addition to reviewing compliance with state and department clinical standards, the streamlined workflows that were possible as a result of the various systems communicating with each other allowed for greater focus on improving department documentation.

As a hospital-based, non-emergent transport service, a primary KPI that is always a constant focus is scene time. One of the biggest benefits that were recognized with integration was the auto population of specific fields within TabletPCR. As a result the average scene time for ALS calls was reduced by 12 percent per call. An extended benefit of the reduction in scene time was a 10 percent increase in total calls competed despite a 5 percent reduction in the average number of ALS vehicles on shift per day.

Regardless of how expensive or exciting a process may be, if the staff using the system doesn’t trust it, any benefits the process is expected to bring quickly disappear. Dispatchers, field providers and administrative staff had grown frustrated with the previous system. It was difficult and often times, very time consuming to complete even the simplest of tasks such as completing a call. Even during the training for the new process and workflows, the excitement had begun to build. Once the system went live, the excitement continued to grow. On a scale of one to five, staff satisfaction with the integrated system averaged a four compared to a two with the previous system. Comments from the staff included:

EMS software solutions are powerful tools with each system capable of producing valuable data. If these tools aren’t integrated, then only a fraction of their potential is being used. When the systems communicate and share information, the amount of high-quality, consistent data that is produced gives you a 360-degree view of your service. Integration provides for a deeper insight into your system that is supported by data. Analysis of the big picture data allows for the identification of problem areas and system weaknesses and thoughtful, data-driven improvement plans to be developed and implemented.